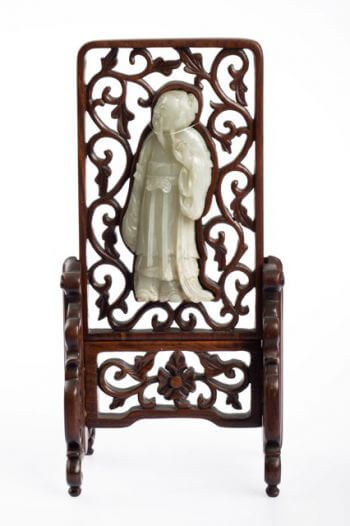 On the first Sunday of October, the Freud Museum joins the nation-wide celebrations of old age called Silver Sunday, by offering a free house tour dedicated to exploring Freud’s intriguing and often contradictory views on the “gruesome business of getting old” (1935). Freud’s own words, from his works and personal letters, will be accompanying the visitors throughout the day.

As part of the tour, visitors will be given the opportunity to see images of the objects from Freud’s collection associated with the theme, such as figures of old Chinese sages and scholars occupying prominent positions around his desk, or the original gifts he received on each of his ‘painful’ birthdays.

The object that often sparks particular curiosity among older visitors is a nineteenth century jade screen, featuring a Chinese character representing shou – longevity. It sits centre-stage on Freud’s desk and is likely to have been the second object smuggled out of Vienna by Princess Marie Bonaparte before Freud’s escape from the Nazis in 1938 (the first one being the figurine of the Greek goddess Athena).

Free with admission, no need book,